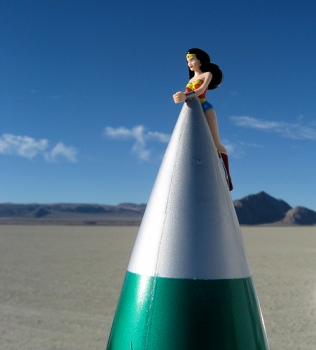 Photo by Jurvetson used under a Creative Commons License.

So as a fantasy and science fiction writer who DIDN’T grow up reading the golden age of the genre, I’ve struggled from time to time with a lack of deep knowledge that embarrass me from time to time. “Oh, well Book X was clearly a response to so and so’s Book Y, which was itself very influenced by Book Z.”

So usually I’ve heard of the authors and the books (but not always), but I’ve almost never been able to really relate to those conversations. Regardless, I understand that most authors wrote, or still write, as a way to reflect, expound upon or comment on changes they see in the society around them. Boundless optimism of the space age? Check. Ruthless Cold War government control of movement and personal freedoms? Yep. Next gen manipulation of commercial/social choice through media control? You betcha.

So when I look at the latest political antics, like Wisconsin’s repealing the Equal Pay Act or the fact that it’s unpatriotic to talk about the war on women or my own state’s trans-vaginal ultrasound proposal, I have to wonder what the hell kind of fiction will we be writing in the next decade?

Will female fairies even have rights in the future? Will women be allowed on spaceships? (Don’t even get me started on how they’re barely allowed on right now. Apparently, breasts touching rocket ships might end space-time as we know it. And be, like, totally gross.)

And the debate on female blog commentary that’s raging right now, following Christopher Priest’s Hugo-slam-a-thon is just completely baffling me. Not that these reactions don’t occur; I know they do. But I just can’t understand why. I just don’t understand or know anyone who would behave that way, anonymity notwithstanding.

This is the part of fandom that I don’t really like, and I have to admit, I have trouble relating to. I rarely participate or even read these discussions for this sort of reason. I almost never feel like I have something useful to say or add, and commenting, “Yea! Me, too!” makes me feel like a tool. But my wife totally called me on it today.